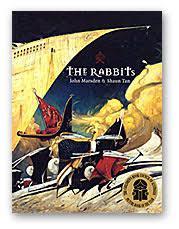 ‘The rabbits came many grandparents ago.
They built houses, made roads, had children.
They cut down trees.
A whole continent of rabbits…’

THE RABBITS offers a rich and immensely valuable perspective on the effect of man on his environment. Visually loaded and told with a passion for truth and understanding, THE RABBITS aims to promote cultural awareness and a sense of caring for the natural world.

In this sobering allegory of colonization, Napoleonic white rabbits subjugate a population of gentle brown marsupials. The lemur-like narrators live humbly in an arid region ("At first we didn't know what to think. They looked a bit like us"). They describe how the Rabbits, who wear military garb and have perfect straight-backed posture, arrive by sea in a metallic golden ship that bristles with sails and steaming iron pipes. The Rabbits carry black muskets and calibrated measuring devices. As the unclothed, rust-brown animals look on impotently, the red-eyed Rabbits brutally alter the landscape. Monstrous sheep graze on artificially green paddocks, and hills are cut away to accommodate highways. By the time the indigenous creatures rebel, in sepia battle scenes, "there were too many rabbits. We lost the fights." In the bleak conclusion, the speakers lament what has been lost: "Where is the rich dark earth brown and moist?... Where are the lakes, alive with long-legged birds?"

Mankind must put a stop to the dreadful destruction caused by the Iron Man. A trap is set for him, but he cannot be kept down. Then, when a terrible monster from outer space threatens to lay waste to the planet, it is the Iron Man who finds a way to save the world.

Mankind for has polluted the seas, lakes and rivers. The Iron Woman has come to take revenge.
Lucy understands the Iron Woman's rage and she too wants to save the water creatures from their painful deaths. But she also wants to save her town from total destruction.
She needs help. Who better to call on but Hogarth and the Iron Man . . .?

A sequel and companion volume to Ted Hughes' The Iron Man.

The Iron Man returns to cause panic for the local farmers.

The farmers are going to need a new plan to deal with the Iron Man.

Something is coming to Earth.