'The Tiger Who Came to Tea'. 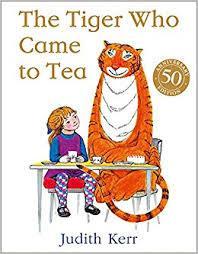 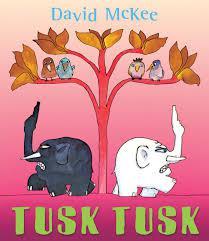 The Tiger Who Came to Tea -

A little girl named Sophie is having tea with her mother in their kitchen. Soon they are joined for tea by a tiger who drinks all the tea, eats all the food in the house and drinks everything, even draining the water from the taps. Then he leaves. Sophie's father comes home and suggests that they all go out and have a lovely meal in a cafe. The following day Sophie and her mother go out to buy some more food, including a big tin of tiger food. But the tiger never returns.

Extract - "Once there was a little girl called Sophie, and she was having tea with her mummy in the kitchen. Suddenly there was a ring at the door. Sophie's mummy said, 'I wonder who that could be?'"

The tiger who came to tea Once there was a little girl called Sophie, and she was having tea with her mummy in the kitchen. Suddenly there was a ring at the door. Sophie’s mummy said, “I wonder who that can be. It can’t be the milkman because he came this morning. And it can’t be boy from the grocer because this isn’t the day he comes. And it can’t be Daddy because he’s got his key. We’d better open the door and see.” Sophie opened the door, and there was a big, furry, stripy tiger. The tiger said, “Excuse me, but I’m very hungry. Do you think I could have tea with you?” Sophie’s mummy said, “Of course, come in.” So the tiger came into the kitchen and sat down at the table. Sophie’s mummy said, “Would you like a sandwich?” But the tiger didn’t just take one sandwich. He took all the sandwiches on the plate and swallowed them in one big mouth full. Owp! And he still looked hungry, so Sophie passed him the buns. But again the tiger didn’t eat just one bun. He ate all the buns on the dish. And then he ate all the biscuits and all the cake, until there was nothing left on the table. So Sophie’s mummy said, “Would you like a drink?” And the tiger drank all the milk in the milk jug and all the tea in the teapot. And then he looked round the kitchen to see what else he could find. He ate all the supper that was cooking in the saucepans… and all the food in the fridge… and all the packets and tins in the cupboard… and he drank all the milk, and all the orange juice, and all Daddy’s beer, and all the water in the tap. The he said, “Thank you for my nice tea. I think, I’d better go now.” And he went. Sophie’s mummy said, “I don’t know what to do. I’ve got nothing for Daddy’s supper, the tiger has eaten it all.” And Sophie found she couldn’t have her bath because the tiger had drunk all the water in the tap. Just then Sophie’s daddy came home. So Sophie and her mummy told him what had happened, and how the tiger had eaten all the food and drunk all the drink. And Sophie’s daddy said, “I know what we’ll do. I’ve got a very good idea. We’ll put on our coats and go to a café.” So they went out in the dark, and all the street lamps were lit, and all the cars had their lights on, and they walked down the road to a café. And they had a lovely supper with sausages and chips and ice cream. In the morning Sophie and her mummy went shopping and they bought lots of more things to eat. And they also bought a very big tin of Tiger Food, in case the tiger should come to tea again. But he never did. Judith Kerr The tiger who came to tea London, Harper Collins, 2006

The black and white elephants kill each other because they do not like each other. The peace-loving elephants run away.

The elephants in the story did not like each other because they looked different from one another.

The elephants in the story did not like each other because of the color of their skin.

At the end of the book the grey elephants don’t like each other because they have little and big ears.

The Tiger Who Came to Tea By Judith Kerr

A Tiger is coming to tea at Norwich Playhouse

Sophie and her mummy are just sitting down for tea, when there is a knock at the door. Who could it be? What they certainly don't expect to see is a big, stripy, hungry tiger! The much-loved picture book by Judith Kerr is brought to vivid life on stage in a delightful family show packed with oodles of magic, sing-a-long songs and clumsy chaos!

On stage The Tiger Who Came to Tea

One of the world's most famous children's stories, The Tiger Who Came to Tea, has hit London's West End. First published in 1968, the children's classic is taking on a new life on stage at the Lyric Theatre. We caught up with the cast at the launch of the new show.

The legendary writer and illustrator Judith Kerr - author of The Tiger Who Came to Tea, the Mog series and When Hitler Stole Pink Rabbit - talks to Emily Maitlis. SUBSCRIBE to get our latest videos http://bbc.in/1iouM30 *

Happy Birthday Becky!!!! 🎀💐🎀💐🎀❤️An ASMR type soft spoken narration of Judith Kerr's "The Tiger who came to tea," "Mog the forgetful cat" and "One night in the zoo". Please be kind 🙏🏽 If you like this video, please click 👍🏽 and subscribe to my channel.