Spring Term 2: Space
Aliens have landed at Dinnington!!!!!
At the start of the term we had an extraordinary visit in the Year 1 garden area - some aliens had landed and had a party! They had left a big mess everywhere, but it looks like they had a fab time. Unfortunately they left their alien babies behind. We became journalists for the day and began to write up reports on the alien landing. Later that week we received a letter from the grown up aliens asking us to look after the aliens until they could return to collect them. We made the alien babies comfortable beds for them to sleep in and put them outside ready to be collected. While we were walking back into school, a grown alien appeared and collected the babies. The aliens sent us another letter saying that they were very grateful for all our help. 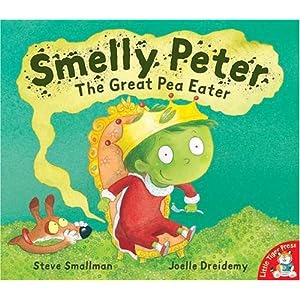 We have been looking at the book Smelly Peter, the Great Pea Eater. We used the Pie Corbett approach to writing to use the book as a stimulus for writing a newspaper report on Peter's (who loved peas - so he turned green) abduction from the planet Earth by the Krellians who took him to the Planet Krell because he was green and made him their king. Unfortunately Krellians fed him Krellian pies (which were not made from peas!!!!) and Peter turned pink again, so the aliens dumped him back on Earth. We took it in turns to be Peter, his mum or a Krellian alien and interview each other to get quotes for our news report; we looked at writing eye catching headlines for our reports and learnt how to write an introduction using the 5 w's - When, who, what, where and why.

Recently, Peter - aged 10, was returned home after being kidnapped by aliens. He was taken to the planet of Krell, where the aliens made him king because of his green skin.

Yesterday Peter, who loves peas told us 'It was good to be king, but after a while I missed home and began to feel sad!'

His mum also said 'I am pleased to have Peter home again, however I am never feeding him peas ever again!'

Peter added that he was pleased to be home and had rather taken a liking to baked beans instead.

Click here to Listen to the story of Smelly Peter, the Great Pea Eater

After we have learnt how to write a report based on Smelly Peter, we then adapted our newspaper writing plans and wrote a report about the alien landing at Dinnington.

Last week, just after dinner time, there was a massive crash in the Year 1 garden. Some aliens had landed and had a party. Unfortunately the grown up aliens left the baby aliens behind.

Yesterday, Miss H told us 'I looked after the baby aliens until the grown aliens came back for them. I was a little bit worried that they would not be returned'.

Over the next few weeks we will be reading the story 'Whatever Next' by Jill Murphy. It will inspire us to write our own stories.
Click here to listen to the story - Whatever Next

Whatever Next with props
This term we are going on our Space Travels and exploring the galaxy. We will be learning about the planets and discovering some interesting facts about them. We will use this information to help us invent our own new planet. Using this we will be able to write non chronological reports about the new planets. We will also be looking at Aliens Love Underpants, to inspire us to create a new species of aliens that will live on our invented planet. As part of this we will design new underpants for the aliens.

We will be learning the names of the planets and finding out how many moons they have, etc. Finding out who was the first person on the moon, discovering what life is like on the moon.

Our theme will start off with an amazing WOW day, read on later to discover more................
Top
Cookie information
Cookie Notice